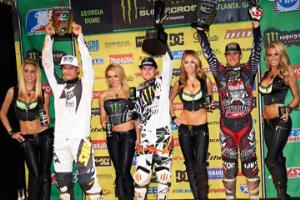 In what Cycle News described as "one of the most dramatic... races in the history of the series," Ryan Villopoto was the unlikely winner of the AMA Supercross race in Atlanta this weekend after an absolute stunner of a finish.

Villopoto isn't an unlikely winner because he doesn't have the skills; he's been racing well all season and this win put him on top of the point standings. However, going into the final lap, none of the 69,751 fans packed into the Georgia Dome thought he had a shot.

Far out in front of nearly everyone was Chad Reed and James Stewart. The two had been trading the lead all day and it appeared to be a two-horse race. Reed, in second place, tried to cut by Stewart on the inside to take the win, but he miscalculated and the two riders tumbled to the dirt.

That allowed Villopoto to sneak by for the win, with Ryan Dungey also skirting past for second. Reed remounted his bike first and finished up in third, while Stewart had to settle for fourth.

The fans clearly felt that Reed was at fault in the crash, and they booed as he took his place on the podium. Reed later said that he didn't regret his actions and he was trying to win the race, not take Stewart out.

"What can I say," Villopoto told the news source. "It's one of those things that happens in racing and I'm happy that I played it cool and had a steady race. Sometimes steady pays off."