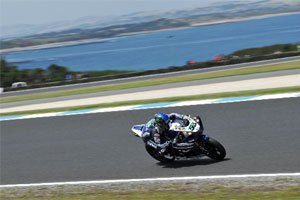 Yamaha World Superbike Team riders Eugene Laverty and Marco Melandri experienced their first ever Superpole shoot-out this afternoon at the Phillip Island International circuit in Australia. The adrenalin fuelled short 'qualifying heats' quickly sort the fastest riders from the pack to decide the grid line up for Sunday's two World Superbike races, the first of the 2011 season.


Laverty continued to display the consistent form fans have seen since he first jumped on the Yamaha R1 race bike, flying through the first, second and third Superpole heats in fifth place, earning himself a second row start for his first ever World Superbike race tomorrow.


Teammate and fellow World Superbike Superpole rookie Melandri was enjoying a much better day than yesterday. The Italian rider had clearly improved his set up from the day before, although was experiencing the stickier Superpole qualifier tyres for the first time this afternoon. Melandri cleared the first session in 11th place, then hung on in the second in eighth to make it through to the final session. Having used all his qualifiers in the first two sessions he couldn't improve on his time but held on for a second row start for what is also his first ever World Superbike race.

"So far so good! I've really been enjoying the weekend so far; everything seems to be running really smoothly. We're still working on our set up for race distance but for the faster laps in qualifying it seems to have worked well. Superpole was a new experience for me, the qualifying tyres require quite a different style of riding so I think I'm yet to get the best out of them. Bring on tomorrow, I'm ready and really excited about seeing what we can do, I just hope it doesn't rain!"

"Yesterday was a bad day for me, today was better but still difficult! The Superpole event was new for me, so I'm happy to be on the second row at the end. I really like it, it's like having three times qualifying so it's pretty nice. It was pretty tough initially as I've never tried the qualifying tyres before, so I had no time to get used to the way they feel. I'm more confident for the races now so we will see what happens tomorrow."

"I'm happy considering both riders are rookies and they managed to get through to the final Superpole on their first attempt. Eugene continues to confirm what he showed in the past and more. Only two months ago Marco had a shoulder operation and even now is not 100% fit so his performance today was impressive. For our first race it's ok to start from the second row. We are still working to find the best set up for both riders as the race will be very demanding on tyres so the key point will be how to save them. We need a quick start off the line, then it's up to both Eugene and Marco to enjoy the race. It looks like it might rain tomorrow, which will obviously be difficult as we have limited wet set up knowledge here, I believe both riders, and especially Marco, can be strong in the wet so we'll see!"

Yamaha ParkinGO rider Luca Scassa got down to work today with a new bike set up and quickly took steps forward to improve from the first qualifying session. The Italian moved up the provisional grid, gaining over half a second on yesterday's performance to take a well earned fifth place start on the second row for tomorrow's first World Supersport race of the 2011 season. Scassa completed a number of laps in the low 1.35's, hinting at a good race pace for tomorrow.


Scassa's teammate Chas Davies was unable to improve on yesterday's performance in the first qualifying session, the young Brit struggling to make another step but hanging in to keep a second row start on the grid in eighth for tomorrow's race. Unpredictable weather and a forecast for rain could make the opening round tomorrow an unpredictable one for all riders in the class.