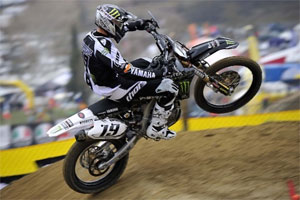 The heavens fell at Ponte e Egola near Florence for the first round of the Italian Motocross Championship 'Internazionali d'Italia' but Monster Energy Yamaha's David Philippaerts battled through the mud to record his second victory in a week. The 2008 MX1-GP World Champion collected results of 1st and 3rd in two difficult motos for the overall triumph in a race format that saw the MX1 and MX2-GP machines competing together.


The first round of four in the national series witnessed Monster Energy Yamaha at full strength and Steven Frossard shone again on the works YZ450FM to place second overall with finishes of 5th and 2nd.


"I am happy to win again and it was not an easy day," said Philippaerts. "Even though the track was difficult I feel comfortable riding in these conditions. I had a small crash in the second moto but I recovered very well and closed a six second gap to Cairoli in two laps. Again I feel that my starts could be better but I was with the leaders both times out of the gate so there is not much work to do there."


"I'm pretty happy but also a bit disappointed because on the second lap of the first race my goggles had steamed up and I had to throw them," recounted Frossard. "It was very hard to ride like that because when I was near another rider I could not see a thing for the mud. If I didn't have the goggle problem then I think I could have been in the top three. I started well in the second moto and I was happy with that."


Anthony Boissiere was less fortunate on the third MX1-GP motorcycle and two falls on the slippery terrain ended his participation. Gautier Paulin was the first classified MX2-GP rider home in the first race but was unlucky to find his rut and path blocked by a fallen rider in the opening stages of the second. It took time for the Frenchman to retrieve his YZ250FM and then another slip when he lost the front-end on a downhill led to a retirement.


"I started well in the first moto considering we were up against the 450s but the first lap was pretty crazy! I got away again strongly in the second heat but Leok crashed right in front of me and there was nowhere to go," he said. "It was very hard to pull the bike out from the mud and I ended up facing the wrong way. I was outside the top twenty after that and when I came off down the hill I was too far back and didn't want to take any more risks."


Christophe Charlier was 14th in the first moto (4th best in MX2) but was involved in the Paulin incident at the start of the second and DNF-ed. Harri Kullas was 16th (5th in MX2) and 17th (6th in MX2) and lamented some mediocre starts against a host of 450cc rivals.


Round two will take place at former GP venue Faenza, east of Bologna, next weekend and will see another full Monster Energy Yamaha line-up grace the start-gate.