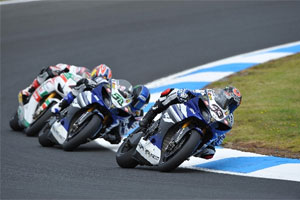 Yamaha World Superbike Team rider Marco Melandri ended his podium drought this afternoon, stepping up to take third position in the second World Superbike race, his first podium since 2009. The World Superbike rookie started well from his second row position, closing in on defending World Champion Max Biaggi and pushing him to the race finale, interchanging for second position a number of times before finally settling for third at the line, less than 1.5 seconds from double race winner Carlos Checa.


The first race of the day saw both Melandri and his teammate Eugene Laverty start well, Laverty impressing by leading the first two laps of his first ever Superbike race, before dropping back to swap positions with Melandri several times. Laverty claimed fourth and Melandri fifth at the line. Both riders had struggled a bit for rear grip in the first race, and Laverty also from arm pump, problems which were rectified by team set up changes and help from Clinica Mobile prior to race two.


Laverty's second race began with the young Northern Irishman pressing on and holding sixth position until lap eight when a false neutral caused him to run wide, losing valuable time and positions. The same issue was repeated on lap 11, dropping him to 20th position by lap 15. Despite the setback Laverty fought back, pushing back up over seven laps to claim 15th at the line.


As they head to Donington in the UK for the second round of the championship, they do so with Melandri sitting in third in the overall standings with 27 points, his teammate Laverty sits in ninth with 14 points, 13 behind Melandri.

"I'm pretty happy with the end results of today, although I wasn't too happy about race one. We've been struggling all week with a rear grip issue, which could be seen in race one. I think we made a good job before race two, changing our set up to deal with it and we were a little bit more aware of our potential afterwards. The bike was a lot better and I felt a lot more comfortable. It's nice to be back on the podium! I wanted to challenge Biaggi for second but in the end my body was slower than my mind at the end of the race, it felt a bit dangerous to make some passes so I was happy to settle for third."

"In the first race I had problems with arm pump and had just to sit there, I had the possibility to go third but didn't want to risk my arms. I got it fixed at Clinica, it was just really stiff after five days riding on a Superbike this week! Marco upped the pace in second race; it would have been tough to beat, but there was a definite fourth there for me. Unfortunately two false neutrals killed the race leaving me with one point. On the plus side I'm very positive for Donington, we've clearly got a very competitive package and under race conditions we can see that our competitors aren't as fast as the practice sessions suggested."

"Today we got confirmation that all the work we have done is in the right direction. We struggled a bit in race one, both riders complained about a lack of rear grip and we could see we where slow in the last sector. With just a few adjustments we improved the bike for race two, so Marco could follow Max and, at the end, the gap to Carlos Checa was not as big as in race one so he kept a good race pace. Eugene did a great job in race one and he was doing in the same in race two. He really impressed us with a fantastic start he showed he could work under pressure and ride in a tough race. He put in the same performance in race two, unfortunately getting a couple of false neutrals and running off, losing ten seconds each time. If not for this he could have been on the podium.


We showed this weekend that the performance of the team is high with both riders so we should be proud, especially considering this is the first time they have run a two race event on a Sunday. Thank you to all the team for a good job done so far and we will try to be even more competitive at Donington."

Yamaha ParkinGo rider Luca Scassa made it a day to remember this afternoon, enjoying an adrenalin filled battle in the top five for the duration of the World Supersport race. The Italian World Supersport rookie made good use of the R6's superior performance to charge through the pack, leading for some laps before dropping back again. He then passed Sam Lowes on the final straight for a photo finish, claiming victory by just 0.009 seconds.


Scassa's teammate Chas Davies had a less fortunate afternoon. Having found a perfect setup for the Phillip Island circuit, Davies had been in contention for the podium for the majority of the race, fighting alternate for second and third position until a flat tyre forced early retirement on lap 18.


Scassa heads to the next round at Donington in the UK leading the championship with a full 25 points, teammate Davies goes keen to get off the points mark and catch up to his Italian stablemate.


Today's victory marks the first race for the officially supported Yamaha R6 since it won the World championship in 2009 with Cal Crutchlow. An impressive result for the Yamaha ParkinGO Team considering the collaboration with Yamaha was started just six weeks ago.