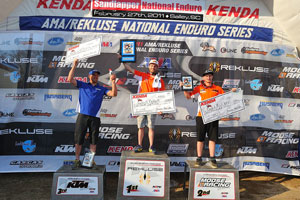 
Bobbitt, a 3-time National Enduro Champion, is no stranger to winning. After struggling with a separated shoulder throughout the majority of last season, he is back to top form for 2011. It's no secret that Bobbitt has revamped his training routine since last October to focus more on speed training and overall fitness. All of his hard work paid off when he captured the win at the opening round in Salley, SC. 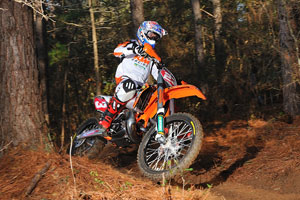 "I got back into my rhythm in the fifth test and had a lot of fun," stated Bobbitt. The final test took the riders back to the second test, only this time they had to run the loop backwards and also incorporate sections of the third loop. Bobbitt reported, "The sixth test was definitely beat down since it was the loop we had used for previous tests. It was really fast and sandy with quite a bit of single-track. I was definitely glad to be on my two-stroke as it was very easy to rip through the single track and put in a fast time."


"We are very happy with Russell's performance today as well as the other six KTM riders that finished inside the top ten. It was a great day for KTM," stated FMF/KTM Team Manager Antti Kallonen.