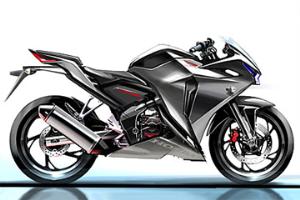 Honda has added a new page to its website, "designer's talk," where the people behind the CBR250R talk about some of the design choices that made the bike what it is today.

According to the website, one of the first steps in designing the bike was to solicit sketches. Honda reached out to designers at their R&D centers in both Europe and Asia to come up with ideas for the new CBR250R.

In Europe, the submitted sketch reportedly focused heavily on the racing aspect of the bike, with a design that looked like it was ready for the track. The Asian sketch was influenced by the large number of commuting motorcycles available in the country, so the design was a little more tuned for everyday use. Eventually, both of these aspects made it into the final product.

That same philosophy carried over to the parts selected for the bike. The designers noted that most high-end racing bikes feature an aluminum frame and multi-cylinder engine. Not only do these features add to the price tag, but they also restrict the bike to serious racers. In an effort to bring the bike to a larger market, Honda went with a single-cylinder engine and rigid steel frame.

"Over the years, Honda has created many motorcycles, but one thing we never forget is to make our bikes fun to ride," the site reads. "Our super sport bikes symbolize fun-to-ride performance, and we are very happy that, with the CBR250R, we are able to offer the fun, satisfying riding and aggressively appealing design of a super sport bike at a reasonable price to riders everywhere around the world."