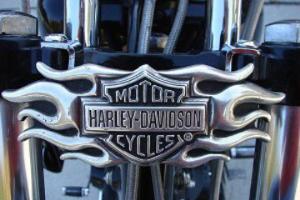 Despite being negatively impacted by the poor economy, Harley-Davidson plans to offer its customers a rare midyear bike called the Blackline. The vehicle will replace the automaker's defunct Night Train, according to the LA Times.

The 2011 motorcycle's wheelbase is 66.5 inches and the saddle height is a low 24 inches. A classic spoke wheel appears in the front and is measured at 21 inches.

The bike comes equipped with an electronic sequential port fuel injected, air cooled, V-twin four-cylinder engine that can produce 89 lb-ft of torque at 3,250 rpm. Its displacement measures 96 cubic inches and its curb weight is 682.5 lbs, the news source reported.

Estimated fuel consumption for the Blackline is between 35 city and 54 highway miles per gallon.

The motorcycle has a number of details, including a blacked-out badge on the tank and a two-tone paint job that is also on the engine. Several of the features of the bike are similar to shovelheads from the 1950s and 160s, reported the news source.

Consumers can expect to pay around $15,499 for the Harley-Davison Blackline.