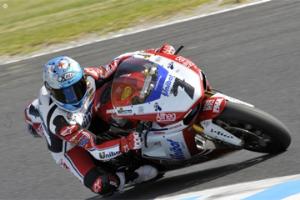 Earlier this week, veteran Carlos Checa rode his Althea Ducati at the Phillip Island Test and beat out Sylvain Guintoli and teammate Jakub Smrz to come out on top. His winning streak continued when he placed first again in the qualifying round, earning the pole position for the World Superbike Championship opener this weekend, according to Cycle News.

"Basically, we worked with the tires this afternoon, just to make choices for race day," Checa told the news provider. "I felt good today, but I think the grip was just a little bit less from the racetrack. We used the 'big' rear tire and had similar results to the previous ones, so if we do that I prefer to continue with the existing tires for now."