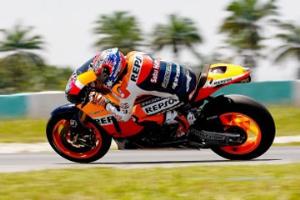 Repsol Honda riders placed in the top three on the second day of the Sepang Circuit in Malaysia, according to Cycle News.

Casey Stoner and Dani Pedrosa came in first and second respectively and set a new record for the fastest lap ever at the track, the news source reported.

"We tested a lot of different things, including the 2011 fork and new shocks, and we found quite a lot of chattering with them," Stoner told the news provider. "We spent 90% of the day on one bike trying different configurations, changing the geometry to get the new fork working with the bike, but didn't find anything that felt really good. But these things are necessary to do before the start of the season."

Ben Spies, who came in fourth place, rode his Yamaha .293 seconds behind Andrea Dovizioso, who was also a part of the Honda team. Spies' teammate, Jorge Lorenzo, placed fifth and rode his test bike as well as his 2011 race bike. He said he wanted to reconfirm new developments, reported the news provider.