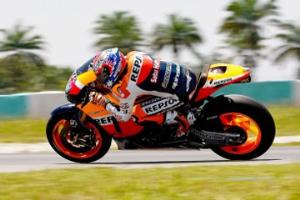 Casey Stoner recentl yposted the fastest test time, riding his Honda RC212V at the Sepang Circuit in Malaysia. His Honda teammates also posted a strong showing, with Dani Pedrosa and Andrea Dovizioso coming in second and fifth respectively, according to Cycle News.

"We had a really good day today," Stoner said. "From the beginning I felt more comfortable with the bike again, like I understood the bike a little better. We managed to work on set-up, but we are still doing a chassis comparison, finding strong points and weak points on both. It's difficult to choose one or the other. Whatever set-up we throw at them we seem to be able to run pretty similar lap times."

Third place went to World Champion Jorge Lorenzo. He claimed he made several improvements during the test and now can brake later and enter corners faster. Additionally, Colin Edwards came in fourth on his Tech 2 Yamaha.

Rounding out the top five was Italian racer Dovizioso, who was extremely happy with his bike, saying the engineers made great improvements to the RC212V.