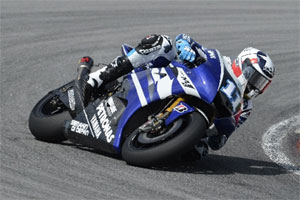 The second official MotoGP winter test of the off-season saw a promising start for the Yamaha Factory Racing riders Ben Spies and Jorge Lorenzo today. As with the first test just under three weeks ago, the riders enjoyed blazing sunshine on track, with track temperatures going from 39 up to 46 degrees. World Champion Lorenzo made some set up changes over the lunch period, finding a highly effective setting that enabled him to deliver consistently fast laps through the afternoon, closing in to end the day in third just 0.48 seconds from the top of the timesheets. Team mate Spies spent his morning getting used to his bike after the break then worked on some different suspension settings. The Texan finished the session in sixth just 0.82 seconds from the front having used just two sets of tyres over the day.

"Today was a good day for me, we worked on the traction to improve it from the previous test which helped us a lot in the set up, I'm now very satisfied with it. We have our chassis for 2011 now and we are working on it as well as our engine spec. With the improvements we've made we can now brake a little later and enter the corners a little more quickly as well so I was able to do some good fast consistent lap times this afternoon when it was still very hot on the track."

"Today we came to this test with the engine configurations we're going to race with so both bikes have that. We just warmed up in the morning and spent the afternoon on one set of tyres. We set our fastest lap of the day when it was very hot and mid race distance on a hard tyre. We're saving some tyres for the end of the test when the track's good. We worked on some race set up an d I also worked on some different riding styles. We'll start again tomorrow with plenty more to do. We tried a couple of shocks and found a few tenths and were still consistently fast on used tyres which was promising. It's definitely a good day and I'm happy with it."

"We had a very hot day today in Sepang with sky high temperatures. As a result there was quite a struggle to find grip. In the afternoon it was getting better and we found some really positive things which helped us find some good traction which is important here at Sepang. Finally we are quite satisfied with today's results."

"It was a very productive day for Ben. We worked on the set up of the bike and made a lot of laps. He was still able to put in a very good lap at the end when the tyre was used which gives us a lot of confidence. Tomorrow we will push on to look for a fast lap time. Jorge was also consistently delivering a good pace, the crew found a good set up and it was clear this afternoon that it was working well for him. Both riders are very positive about their crew performance so we are very satisfied with the team."