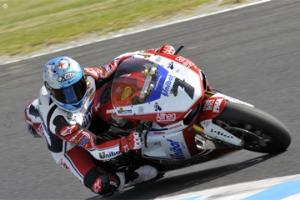 Carlos Checa recently placed first in the Philip Island circuit, riding his Ducati Althea Racing 1098R. He clocked in with a time of 1:31.383 minutes and beat Troy Corser's record of 1:31.826 which was set in 2007, according to Cycle News.

"We know the Ducati works well here and this track I really like," Checa told the news source. "We never tested with this bike here in the winter, but from the beginning I felt comfortable. We started with the settings of last year's race and that was quite good. We changed some small things and understood some direction to take with set-up. Then it was just working with the tires and I used three different ones. Now we need to check which one will be the best for the races."

Teammates Sylvain Guintoli and Jakub Smrz from the Czech Republic also rode Ducatis and placed second and third respectively. Max Biaggi, a world champion, came in fourth place and was only .067 seconds behind Smrz, according to the news source.

Rounding out the top five was Michel Fabrizio of the Suzuki Alstare team, who had a time of 1:32.453 minutes. Additionally, Marco Melandri, who placed seventh, showed a major improvement from his last test, where he placed 15th.