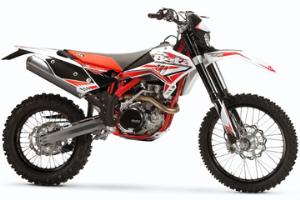 There will be a limited number of Beta's new 350 RR which will be sold in the U.S. this April. The bike is said to come with the first four-stroke enduro engine, to be produced by Beta.

Officials spent over a year developing, researching and building the bike. The company has put the vehicle through thorough testing as well. Beta wanted to make a 350cc four-stroke engine that has the same great features of a 250cc four-stroke. However, the company also wanted the engine to have the reliability of a larger displacement motor.

The 350 RR has light handling and allows for quick turns, similar to a 250 four-stroke. It is extremely agile and allows riders to take accurate and quick corners. The balance shaft gets rid of vibrations and cuts down on arm pump.

Consumers can purchase the Beta 350 RR in April for a manufacturer's suggested retail price of $8,499. The bike is also part of the company's Build Your Own Beta program, which allows customers to order their Beta with a variety of installed accessories.