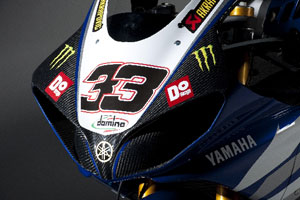 Following a successful 2010 season where Monster Energy became the 'Official Energy Drink Supplier' for the Yamaha World Superbike Team, the relationship has been extended for the new season. The 2011 team sees new rider pairing Marco Melandri and Eugene Laverty both sporting strong Monster Energy branding on their helmets and as the team's relationship strengthens the YZF-R1 race bikes of Melandri and Laverty will also now carry subtle M-claw logos on their fairings. Monster Energy will continue to have a strong presence in the Yamaha World Superbike Team hospitality.


Monster Energy continues to drive a global fanbase by supporting action sports, motorsports and music. Its commitment to 2 wheel motorsports includes Motocross, Supercross, Superbikes and MotoGP plus relationships with some of its greatest athletes. Its action sports roots are unmistakable and the brand continues to work with awesome talent across skate, bmx, surf, FMX and many more sports besides. Having arrived on European shores in 2008, Monster Energy is continuing to grow at speed outside of its US base and brings an unmistakably fresh and fun loving approach to the scenes it supports.


The hugely successful relationship between Yamaha Motor Europe and Monster Energy is now entering its fourth year in World Motocross, in 2011 no less than six Monster Energy Yamaha riders will be challenging for world titles in both the MX1 and MX2 world championships.


In the MotoGP World Championship the Yamaha Tech3 Team continues its partnership with Monster Energy this season and alongside Colin Edwards takes on MotoGP rookie Cal Crutchlow who was also supported by Monster Energy last year when riding the Yamaha YZF-R1 in World Superbike.