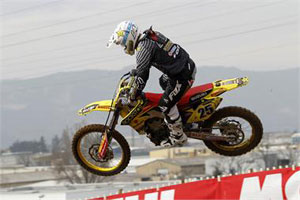 Rockstar Energy Suzuki World MX1 completed its first competitive motocross race of 2011 with victory in cold and wet weather conditions at Valence in France as Clement Desalle took victory with two wins and a third position and team-mate Steve Ramon was eighth overall.


The shallow hillside circuit just south of Lyon was battered by rain through Saturday evening and Sunday morning and forced a generous gathering of Grand Prix stars to take their opening meeting of the year with a degree of caution: Overtaking was difficult on a terrain chiselled into one line.


2010 MX1 World Championship runner-up Desalle, on the RM-Z450WS, roared away with the first 20-minute moto after obtaining the holeshot and working a lead of over 10 seconds from Ramon; equally-comfortable in second place. But the works RM-Z450s could not formation-fly in the second race as Ramon was not as prominent out of the gate and even slipped off once on his way to 10th. Desalle was into first place by the second lap and didn't look back, even during two moments of brief pressure from Sebastien Pourcel.


In the third and final sprint of the day, Desalle was holding a comfortable second position but suffered rear brake trouble courtesy of an errant stone. In the final laps he had a small tumble and finished third. Ramon hit the mud in the opening phases and eased his way through the rest of the race distance.


"Yesterday we tried some new parts on the bike and it was good to try but I was not super-sure for this track so we kept with the same set-up we had before," said Desalle. "The results were good today because the track was very slippery and I struggled when the stone hit my rear brake in the last heat. I did not want to crash and hurt myself like last year."


"It wasn't too bad today," commented Ramon. "The first moto was OK with a good start even if I did have a bit of arm-pump. The track was really difficult because it was so slippery and hard to get any traction. The second moto start wasn't great and my rear brake was playing up so it was tricky on those downhills. In the third moto I was riding well and trying to push but the bike slid away and I lost a bunch of positions. My right elbow and hip were bothering me so I just saw the rest of the race out."


Suzuki's factory team will now remain in the southern region of France over the coming week for further tests and participate in a local event at Lacapelle-Marival next Sunday.