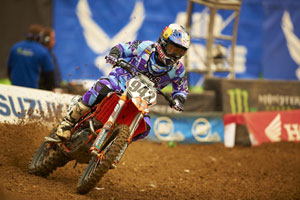 JDR/J-Star/KTM rider Tye Simmonds will be sidelined for the seventh round of the AMA Supercross Series taking place at Qualcomm Stadium in San Diego, CA after being diagnosed with chronic bronchitis and pneumonia early this week.


The Australian rider, in his first professional U.S. Supercross season, has qualified for two of the U.S. Supercross rounds and is showing improvements in his speed as the series progresses. The Houston Supercross was his most disappointing race this season as he was fighting the beginning of his illness. "I thought I just had the flu, so I choose to try and compete at the Houston Supercross. Unfortunately, my body was so weak feeling, it was hard to push and be aggressive on the track and I ended up being far off the pace of the leaders," remarked Simmonds.


As soon as Simmonds returned to California after the Houston Supercross he was evaluated by his doctor and it was determined that he had chronic bronchitis and pneumonia and would need to sit out the San Diego round and rest until recovered.


JDR/J-Star/KTM Team Manager, Nathan Ramsey, reported, "Tye (Simmonds) was really sick last weekend so we sent him to the doctor immediately when we got back. Once we got the diagnosis, we tried to keep him off his feet to see if he would feel any better. Unfortunately, only two days away from the race, he is still very ill. We have decided to have him sit out to allow him to fully recover."


Although, Simmonds won't be racing, the JDR/J-Star/KTM support rig will be at the San Diego Supercross and would love for their fans to stop by and wish Simmonds a speedy recovery.