Slash To Auction Off Custom Harley 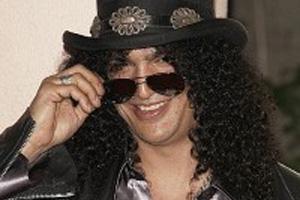 A lot of celebrities have confessed their obsession with all things motorcycle, but it's not often that one of their prized possessions goes up for sale. Bikers will have a chance to own a piece of history when the custom Harley-Davidson owned by Guns N' Roses guitarist Slash is sold at auction.

Julien's Auctions in Beverly Hills California will handle the transaction on March 26th, when the bike and a number of Slash's other possessions are put up for bidding. The model is a Harley-Davidson V-Rod VRSCAW Twin Racing Street Custom Cruiser, featuring an 1130cc engine, 5-speed manual transmission and an oversized rear tire.

Clutch and Chrome estimates the value of the bike at around $8,000 to $10,000, but that price could rise given the rock god's involvement with the machine. Also for sale will be Slash's motorcycle jacket, a sleek black design with plenty of fringe. A number of Slash's guitars will also be available for bidding. No word yet on whether one of the guitarist's famous top hats will be included.

As an added bonus, anyone who shows up to the event dressed as Slash will receive a free copy of the entire auction's catalog for their perusal.