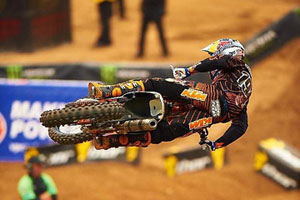 There has been a lot of press circulating around the 16 year-old German Red Bull/KTM Factory Team rider, Ken Roczen, after earning his first U.S. podium in the AMA West Lites Supercross class at Anaheim 2 and breaking into the top ten in the premiere class the following weekend. The question now, is what lies ahead for this young superstar?

To start, Roczen spent the majority of the morning riding around for the news cameras to promote this weekend's San Diego Supercross where he will return to his KTM 250 SX-F in the West Lites SX class before he begins preparation for the MX2 World Championship back in Europe.

Following the San Diego Supercross Roczen will juggle both U.S. racing and the World Championship as he will meet up with his European mechanic in Murrieta, CA to begin testing for the motocross series in Europe. While getting his feet wet with some outdoor riding he will continue to train in SX racing to return in the big bike class aboard the KTM 350 SX-F at the Daytona Supercross.

"I have always wanted to race at the Daytona track," commented Roczen. "I had a lot of fun racing the 350 SX-F at Houston and wanted to get one more ride in before I left for Europe."

Immediately following the Daytona Supercross, Roczen will fly to Europe where he will remain until the start of the MX2 World Championship in April. Roczen will begin the series in Europe before returning in mid-April for the last few rounds of the West SX Lites Championship.

For the latest news on Roczen please visit www.ktmusa.com or follow Roczen on his twitter at @kenroczen94.