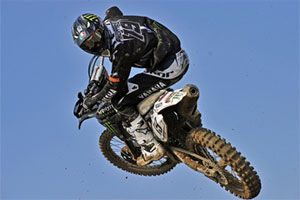 Monster Energy Yamaha's 2011 MX1-GP contingent will turn the wheels on their works YZ450FMs in anger for the opening events in the European motocross calendar this weekend. The Starcross International at Mantova in Italy will see 2008 world champion David Philippaerts run the 2011 spec of his deft machinery through the sand with new Yamaha recruit Anthony Boissiere, entered by the Gariboldi faction of the team, for company. Meanwhile further north another fresh addition to the Yamaha ranks, Steven Frossard, will make his first appearance in the distinctive black and green livery when he tackles a generous host of MX1-GP peers at Valence in France.


Philippaerts has been keeping himself in top condition over the past few months in various locations and is now on the edge of his fourth term with Yamaha and the Rinaldi group. "It has been a good winter, I spent two weeks in the mountains doing some training at high altitude and then almost three weeks in Sardinia where I was able to ride every day because the weather was so good," said the tough 27 year old. "At the moment I am working very hard by running and cycling everyday but Mantova is coming close and I'm happy for that because the races will then begin and the calendar becomes busy!"


"I have a new mechanic for 2011, an Italian who used to work for one of the Yamaha GP teams and who I know well, so that is something very positive and our tests have left me happy in terms of the performance and the strength of the bike," he added. "We have two days of engine tests planned for Tuesday and Wednesday this week and we will have even more information."


Frossard spent almost a month in Belgium before heading to the south of France and sunnier climes. Alongside MX2-GP rider Gautier Paulin he completed a thorough suspension test last week and is now braced for chilly temperatures in Valence where he will get a taste of competitive action in the 450cc division for the first time. For Boissiere the chance to race with the YZ450FM from within the Gariboldi camp permits a return to the brand with whom he took his first chequered flags at MX-GP level in 2005.


"I was resting with an injured wrist in December but once I felt better then I was able to train hard in the south of France where the weather was more reliable than being in Belgium," the 25 year old commented on the build-up to his second MX1-GP campaign. "I have been riding the Yamaha a lot and I feel good on the bike. The engine is crazy; it is so strong, so I'm happy for that. I have found a very professional and passionate team with the Gariboldi guys and my mechanic is very good, so we are set for a good season."


"We start in Mantova this week and then ride the Italian Championship with all four rounds before the first Grand Prix," he added. "In terms of the world championship my only goal is to give the best of myself and I am working hard to get good results."