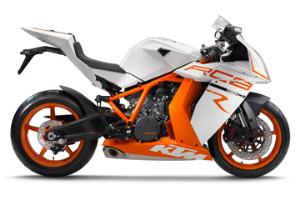 The big model getting an update is the 1190 RCR8. The base version of the RCR8 has undergone some minor changes, like a new electronic control unit (ECU), revised suspension and new colors (white/orange and black/orange). What players might notice first, however, is the new lower price of $16,500.

Racing fans will also have the option to upgrade to the RCR8 Race Spec. This is a limited edition version of the RCR8 that the company claims is for "competition use only." This $20,000 bike is a complete overhaul of the base RCR8, with all-new parts installed specifically for racing. Riders will get high-performance brake pads, Marchesini wheels, specially machined foot pegs and levers, a race-tuned suspension and much more.

Another new addition to the lineup is the special "Adventure Dakar" edition of the 990 Adventure, made in honor of the 30th anniversary of the famous Dakar Rally. This special edition combines elements of the standard Adventure and Adventure R, featuring the 115 horsepower engine of the R and the base model's suspension. Riders who upgrade to this edition will also get a unique blue and orange paint scheme and Dakar Rally graphics. The Adventure Dakar will be available for $15,500, which is a $600 premium over the standard edition.