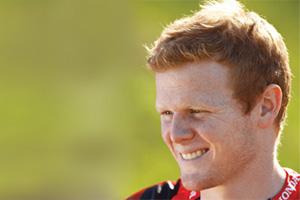 Unlike some of the races in past weeks, which saw James Stewart get out to an early lead and never relinquish it, the sixth race of the AMA Supercross season in Houston featured plenty of tense moments all the way down to the end, with Trey Canard eventually emerging victorious.

Stewart, who has won two races back-to-back and wire-to-wire, crashed right out of the gate causing a pileup that also slowed Chad Reed, Ivan Tedesco and Justin Brayton. Ryan Villopoto was able to avoid the crash, but was forced off the track and started the race behind.

The early leader was Kevin Windham, who enjoyed a big lead over the other riders at one point. Unfortunately, Windham crashed at a tricky table section and couldn't finish the race, complaining of sore ribs.

That meant that the race turned into a dogfight between Trey Canard and defending champion Ryan Dungey, still looking for his elusive first win. The two traded first place several times, but Canard was ultimately able to hold on in a thrilling final lap to get the win.

Villopoto fought back and took third place, which allowed him to leapfrog James Stewart for first overall in the point standings, as Stewart placed fifteenth after his crash. Canard also shot up the rankings with the win and now sits at third overall.