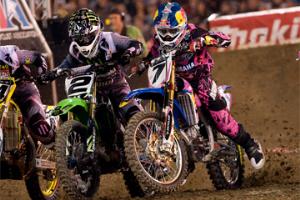 Even more impressive is the fact that Stewart was able to duplicate his dominant performance last week in Oakland, as Anaheim saw Stewart ride wire-to-wire, never once surrendering the lead after he gained the holeshot. Monster Energy Kawasaki's Ryan Villopoto, second in the point standings to Stewart, was able to snag second, but never seriously challenged Stewart's comfortable lead.

"I am so proud of everyone on my team for making this happen," said Stewart. "It's awesome to come here and win in front of a sold-out crowd here at Angel Stadium. I am out here racing against the best guys in the world, so this is never easy."

Defending champion Ryan Dungey's woes continued, as he was never able to mount a serious challenge. Making matters worse, the rider lost a chance for fifth place after one of his chains gave way, causing him to record his first DNF in Supercross competition. After dominating 2010, Dungey has yet to win a race this season and sits fifth in the point standings.