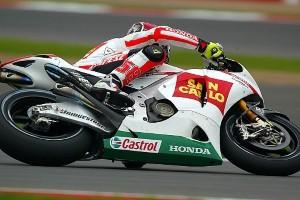 The third and final day of testing at the Sepang track in Kuala Lumpur, Malaysia, ended with a surprising name at the top as San Carlo Honda Gresini's Marco Simoncelli posted the fastest time, completing a string of tests in which Honda absolutely dominated.

Not to take anything away from second-year rider Simoncelli, but most expected a big name like Day 1 winner Casey Stoner, Day 2 winner Dani Pedrosa or World Champion Jorge Lorenzo at the top of the list. Incidentally, Pedrosa, Stoner and Lorenzo were second, third and fourth, respectively.

What wasn't a surprise was seeing Honda's name up in lights again. The manufacturer had the fastest time on all three days and ended with five of the top seven overall times. Only Lorenzo and the American Ben Spies were able to insert themselves into the equation, both riding for Yamaha.

Disappointment continued for the new Ducati duo of Nicky Hayden and Valentino Rossi, who were able to improve on their earlier times but still trailed the leaders by a full second. Hayden finished with the eight-best time overall, while Rossi settled for 11th.