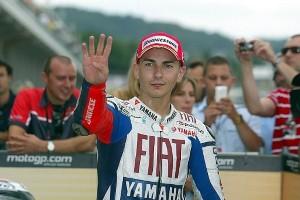 On their way back home before the beginning of the 2011 MotoGP season, Yamaha teammates Jorge Lorenzo and Ben Spies took some time to interact with their fans in Thailand after a three day test at the Sepang track in Malaysia.

A reported 10,000 people turned out to see the motorsports superstars, and the duo didn't disappoint. Lorenzo led a pack of approximately 600 riders on a closed course around the city, with Spies flagging the start of the demonstration.

The two then joined Yamaha's Thai CEO Fumiaki Nagashima onstage before giving interviews to the assembled press and signing autographs.

The festivities capped off a somewhat disappointing test session for Yamaha, where defending champ Lorenzo was unable to get in front of his Honda rivals, finishing with the fourth-best time overall. Spies finished seventh.

Lorenzo didn't pull any punches when saying that he thinks the team needs to work hard if they are to repeat last season's championship.

"I would like a better bike, and this is what I've asked of the engineers. I think every rider asks for that," he told Motosprint. "I'm not saying it's not a winner anymore: I'm saying that in order to win the number of races won last year we need progress. At the moment, I think this bike would not enable me to repeat a successful season like 2010."