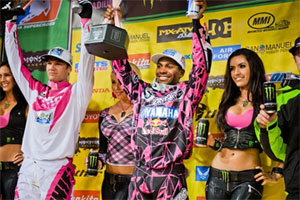 The second visit of the 2011 AMA Supercross series - also an FIM World Championship - to the Angel Stadium in Anaheim, Los Angeles saw San Manuel Yamaha's James Stewart maintain his 100% podium record on the YZ450F by taking his third victory from the five rounds of seventeen held so far.


The Floridian scored his second successive victory and took his career tally to 40 Main Event triumphs by leading from the first corner to the last. The achievement, earned in front of 45, 050 spectators, also saw Yamaha head to the top of the pile in terms of manufacturer's garlands at Anaheim - one of the spiritual homes of the championship - with 20 wins. The 25 year old's superlative and spectacular quad-quad approach to the rhythm section was risky but helped edge the difference over his rivals.


"You know, I'm just comfortable on my bike this year," said Stewart who has now taken the chequered flag on nine separate occasions at Anaheim and extends his impressive career stats to 56 podiums from 65 starts. "It's five races in and I'm just getting comfortable racing. I was a little rusty in the beginning and we're starting to get a little better and we'll keep on working. The quad-quad looked cool, but actually it really wasn't that much faster. I think I was pretty good through the whoops and some other places. The Yamaha is working fantastic and I felt comfortable doing it."


Stewart was able to cross the line ahead of Ryan Villopoto (the only other rider to win this year) and now fronts the standings by 5 points. Round six will take place next Saturday at the Reliant Stadium in Houston.

Rider Standings After Race 5 of 17