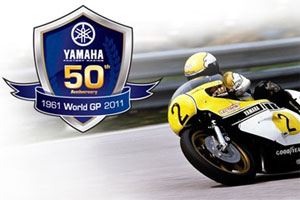 2011 witnesses a landmark of World Championship Grand Prix racing for Yamaha, having successfully competed at the highest level for 50 years. From the very first Grand Prix entry in the French GP of 1961 to today, Yamaha has been an icon at the forefront of Grand Prix racing with countless victories delivered the world over to the delight of the many loyal and dedicated fans. Yamaha will commemorate this incredible achievement over the course of this year with a number of actions.

A special 50th Anniversary logo has been created using Yamaha's corporate colours and will be used during the season. The logo will be proudly displayed on the 2011 YZR-M1 fuel tank, on all Yamaha Factory Racing Team uniforms, within the pit garage of riders Jorge Lorenzo and Ben Spies and also on the Yamaha Factory Racing trucks.

The World GP 50th Anniversary will also be celebrated online with a special dedicated website - 50TH YEAR OF ROAD RACING WORLD CHAMPIONSHIP GRAND PRIX - live from tomorrow, 1st February 2011. The website features an impressive archive tracking the history of Yamaha's involvement with racing along with detailed historical information. Throughout the season the site will be regularly updated with columns and videos along with exclusive messages and interviews of key people involved in the Yamaha story.

Several exciting events are also planned to bring some of the glorious racing history to life. A special demonstration run for the public and global media at Motegi in Japan will see iconic machines back on track. The legends on the circuit for this special event will include the 1974 YZR-500 (OW20), Yamaha's first 500cc factory bike and the 1978 YZR-500 (OW35K) which delivered three championships at the hands of Kenny Roberts. This event will also be scheduled for Assen to allow European fans to take part in the celebrations and see Yamaha's racing history come alive.

"As we enter the 2011 race season, Yamaha Motor Co., Ltd. will be celebrating the 50th anniversary of the start of our Road Racing World Championship Grand Prix category. These 50 years of continued challenge at the top level of the sport would not have been possible without the support of the fans, our suppliers and sponsors and the race organizers. I would like to take this opportunity to extend my sincere thanks to everyone for this.

Yamaha Motor Company began participating in races from the year of our company's founding in 1955. Our history of competition in the World GP began in 1961, when we entered a team with riders Taneharu Noguchi and Fumio Ito in that year's French GP.

In these 50 years of competition, Yamaha has tasted sweet victories as well as bitter defeats, but through it all we have never lost the "spirit of challenge" that we started out with. Those ongoing efforts have brought us countless technological breakthroughs and, equally important, has enabled us to share the Kando* of racing with people all over the world.

We are both grateful and proud that one of the highlights of our history of World GP competition came last season, when Yamaha won the Triple Crown of rider, team and manufacturer titles in the pinnacle MotoGP class for the third consecutive year. This is another achievement that would not have been possible without the support of the fans and everyone involved. At the same time, I believe it stands as proof that our spirit of challenge is as alive today as it was five decades ago.

Although economic conditions and the business environment may be tough at the moment, I promise that we will continue our race efforts as the "Kando Creating Company" we strive to be. In closing, I would like to express my gratitude once again and ask for your ongoing support of Yamaha Motor's corporate activities."

*Kando is a Japanese word for the simultaneous feeling of deep satisfaction and intense excitement that people experience when they encounter something of exceptional value.

"It is my honour to announce that this year marks the memorable 50th Anniversary of our great challenge for the Road Racing World Championship Grand Prix, started in 1961.

Since then we have consistently produced many exciting scenes for our global audience and various motorcycles for our customers with excellent cutting edge technology from the racing world.

In this memorable year we are planning to express our gratitude to the people all over the world who supported us with their help and expectation. We will do this through the various events throughout the season.

We will start strongly for the next 50 years remembering our primary mission which is to create fresh emotion, new technologies and potential engineers to contribute for the promised future".