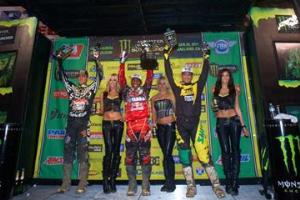 Shaking off a terrible qualifying round that was plagued by mistakes and falls, James Stewart was able to overcome the odds and ride to victory at this weekend's Oakland Supercross event.

The event, which was the first motocross competition in Oakland in several years, attracted 40,000-plus fans, despite the rain-soaked weather. Riders had to deal with slick conditions, something which Stewart originally had trouble adjusting to during his practice and qualifying round.

In fact, Stewart opted to sit out the second qualifying race after a fall in the first, meaning that he had the eighth choice of gate when it came time for his heat.

Ryan Villopoto was able to get the holeshot and jump out to an early lead. However, while last week Stewart fell and gave Villopoto an opening, this week it was Villopoto's turn to taste dirt, as his fall allowed Stewart to race to an unchallenged lead. Ryan Dungey and Chad Reed battled it out for second, with Reed eventually nosing in front.

"This is a great win for me and the team," Stewart told Cycle News. "It's a long season and it's all about winning a championship. The rain tonight made it a little difficult, but I am glad I came out on top."