Stewart On Top After Oakland Win 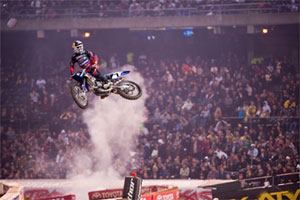 James Stewart overcame two practice falls to clinch his second victory of the season at the Oakland-Alameda County Coliseum in Oakland for the fourth round of seventeen in the AMA Supercross series (an FIM World Championship), extending his 100% podium streak and also hitting the top of the standings for the first time.


The LandM Yamaha rider touched the ground twice during the free-practice sessions but mastered the slippery course - that was rough, bumpy and slick due to heavy rain - in front of more than 44,000 spectators. Stewart overtook principal title threat Ryan Villopoto when the latter crashed on the second lap and pulled away on his YZ450F to recover from what had been a dramatic start to proceedings on the west coast.


"I think the biggest thing for me was rebounding after a day like today," said Stewart who now has 39 career victories and notched Yamaha's first in what was only the fourth SX event in Oakland. "It was a rough day, for sure, and I'm not going to be mad that I'm in the points lead! I just want to keep it going and try to make it happen. I want to give-it-up to my team today; they did an awesome job of rebuilding the bike a few times and kept the attitude good. We'll just keep on rolling from here."


JGR's Davi Millsaps grabbed his best finish yet on a Yamaha with 8th place and was the only other finisher in the top ten. James Stewart now fronts Villopoto (both riders have claimed all four rounds between them so far) by 2 points as the championship prepares to move back to Anaheim and the Angel Stadium next Saturday. Reigning Champion Ryan Dungey is third in the ranking with Trey Canard fourth. Justin Brayton - who had problems and could rise no higher than 18th in Oakland - is 9th and Kyle Chisholm (15th last Saturday) is 10th.

Rider Standings After Race 4 of 17