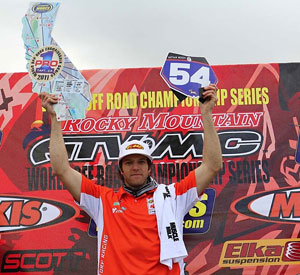 FMF/KTM rider Kurt Caselli's goal this season is to defend his championship one race at a time. This weekend, that took a backseat to honoring his friend and fallen teammate, Nathan Woods.


The entire off-road racing community was devastated after hearing Friday's news of Woods' passing. The winningest rider in WORCS history and a 2-time WORCS Champion, Woods succumbed to injuries after a crash during Friday's practice session. Saturday's race schedule was moved to Sunday to allow the WORCS community to participate in a parade lap in honor of their late friend. The parade lap was led by Woods' wife Amanda and former mechanic and long-time friend, Charles Jirsa. Caselli followed behind with Nathan's son Braxton, and behind them was a long train of friends and family who rode a lap for one of the sports' best riders. 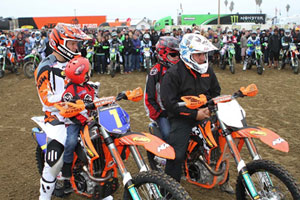 With a heavy heart, WORCS resumed the race schedule on Sunday and riders lined the gate to race a 1 hour plus 1 lap moto. Caselli took the holeshot and led the entire race, increasing his lead each lap. His only mistake throughout the race occurred when he washed out the front end on the first lap, but Caselli quickly recovered to still finish the lap with a 25 second lead. The FMF/KTM Team had Caselli and teammate Mike Brown pit once for gas near the end of the race to ensure the riders would have enough fuel to reach the finish.


While Caselli held the lead out front, Brown bounced back and forth inside the top three, battling with Still Performance/KTM rider Kevin Rookstool. Near the end of the race Brown struggled with arm pump and dropped a few positions to eventually finish 5th. Rookstool took a spill halfway through the race and recovered to finish behind Brown in 6th. Caselli took home the win by 1 minute and 1 second over the 2nd place ride of Kyle Summers. 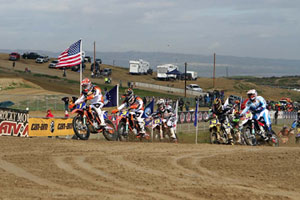 "We are very happy with the results today. Caselli is exactly where we expected him to be and his new training program is paying off. Brown was also inside the top three for most of the race and we feel both of our riders will be top competitors throughout this series. As devastating as this weekend has been, it is welcoming for Caselli to win in honor of our friend Nathan Woods," remarked Antti Kallonen, Factory FMF/KTM Team Manager.


After rearranging the race schedule on Saturday, WORCS officials decided to give each rider 24 points for Saturday, with the exception of Woods who was awarded 25 points for Saturday and 25 more for Sunday. Fittingly then, at the end of the day it is Woods who will lead the series heading to the next round, as he has done many times before.