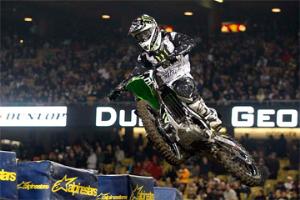 Ryan Villopoto took home his second win of the season at the Los Angeles Supercross in Dodger Stadium, cementing his position atop the AMA Supercross standings.

Villopoto, of Monster Energy Kawasaki, was able to pilot his KX 450 F to first place in front of 41,000 fans. It wasn't an easy win, however, as wet conditions caused several top riders to crash.

In the early goings, it looked as if Rockstar Makita Suzuki would ride away with the race, as Brett Metcalfe won the holsehot and his teammate Ryan Dungey started out in second. Yet Metcalfe was unable to hold on to the lead, as he crashed shortly after the first lap. Dungey momentarily seized the lead, but he was passed by James Stewart.

Stewart was able to hang on until Lap 11, when he suffered a minor crash of his own. Villopoto was then able to take advantage and take first, never relinquishing it. Stewart was able to recover from his crash and finish second, while Dungey took third.

"It was really slippery out there tonight," said Villopoto. "The start of my race didn't go as planned, but I was able to make up some time early on and things went my way."