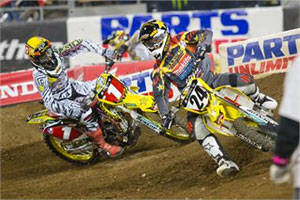 
The 21 year old defending Champion led the 20-lap Main Event, held in front of a packed 41,000 crowd, for three laps before losing it to James Stewart (Yamaha). The pair battled hard for 17 laps, swapping positions several times; Stewart eventually grabbing second place behind Ryan Villopoto (Kawasaki) after putting in a block pass in the closing stages.


After qualifying fourth, Dungey and his Suzuki came out strong and dominated his heat race with a convincing win. In the Main, he grabbed a second-place start out of the gate just behind team mate Metcalfe and pulled into the lead by lap two. His Suzuki RM-Z kept him in the front pack for the duration of one of the most exciting Main Events in recent years.


"I'm happy about the day," said Dungey. "Winning the heat race was definitely a step in the right direction. In the Main, I got a good start on my RM-Z450 and we had to battle pretty much all race long - it was kind of cat and mouse. Overall, happy on the day; we just came up a little short. My Rockstar Makita Suzuki team and I accomplished a lot, so we can't complain about anything. I'm definitely looking forward to Oakland and going to another new stadium. We'll do some work this week and show up to Oakland ready to go."


Metcalfe started his night with some tough luck in his heat race but fortunately was able to score the final qualifying spot for the Main Event. Despite an outside gate pick, Metcalfe and his Suzuki RM-Z450 blasted out of the gate and pulled the holeshot just ahead of Dungey. He led the first lap and a half until a small mistake put him on the ground. The Rockstar Makita Suzuki rider remounted and rode a strong 18 laps to an eighth-place finish.


"It was a good day," said Metcalfe. "My Rockstar Makita Suzuki team was able to make some changes to my Suzuki that made me much more comfortable on the bike this week and that made me be able to get up to speed earlier in practice. I had a tough heat race but was able to climb back up to ninth so I didn't have to go to the LCQ. In the Main Event, I just dropped the hammer and my RM-Z hooked up and I was able to get the holeshot and led the first lap. I made a mistake on the second lap and went down and lost quite a few positions. Overall, I was happy with the ride; it was just that mistake that disappointed me. I'm really looking forward to Oakland - another new stadium: The dirt should be a little looser and more tacky, which will suit my style a little better."


The 2011 Rockstar Makita Suzuki team's next event is Saturday, January 29th, at the Oakland Coliseum in Oakland, California.