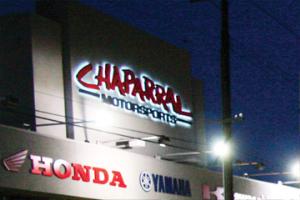 As a show of support for its fans and customers, Chaparral Motorsports has announced its 2011 Supercross Fan Appreciation Night, which will give locals the chance to interact with some of the top riders in motorsports.

The guest list is filled with famous names, so fans should show up with all their motorcycle apparel in the hopes of walking away with a few signatures. The night promises to be a fun one with plenty of superstars in attendance.

Chaparral will be keeping fans posted with the official guest list as riders RSVP, but some top competitors have already been invited. Cycle News Rider of the Year Ryan Dungey and his teammate Brett Metcalfe of Rockstar Makita Suzuki are among those invited. Ryan Villopoto and Jake Weimer of Monster Energy Kawasaki may also make an appearance. And fans of teams like Red Bull KTM, Hart and Huntington, Metal Mulisha Moto, Joe Gibbs Racing and more might have the chance to see some of their favorites in the flesh.

The event will kick off on February 2nd, 2011, at 6 p.m. and last until 8. Chaparral's headquarters is located at 555 South H Street in San Bernardino, California. Given the high attendance in years past, Chaparral Motorsports recommends that fans hoping to rub shoulders with their favorite superstars show up a little bit early so that they can ensure they beat the rush.