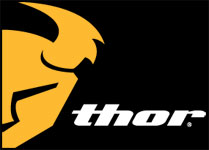 Thor is proud to announce the 2011 Off-Road Race Team. This collection of riders is founded on championships and looks to continue that tradition throughout 2011 in each the off-road disciplines.

If all those championships weren't enough fire power already, the KTM Team picked up veteran Thor rider, Charlie Mullins (2010 Enduro Champion, and 2010 GNCC XC1 Runner up). Rounding out the team will be Cory Buttrick, who should also compete for podiums throughout the GNCC XC1 season and Enduro Series.

There are a couple of Monster Energy Kawasaki riders that should run out front on a weekly basis this season as well. Long time Thor rider, Destry Abbott returns to the team in 2011. The 5-time Hare & Hound Champion looks to be as busy as anyone. Abbott is preparing to ride not only the Hare & Hound series, but also the WORCS and EnduroCross series' as well.

The youngster in the group looking to make a splash in 2011 is Monster Energy Kawasaki rider, Taylor Robert. The 2008 Pro 2 WORCS Champion is set to race both the WORCS and EnduroCross series' in 2011.

Last, but definitely not least, is legendary off-road racer, Larry Roeseler. The multi-time national champion returns for 2011 to head up a Thor dealer ride, and continue his long time role assisting with Thor product development.

Below you can double check on which series you can find your favorite off-road rider. We'll have plenty of off-road racing updates in 2011, and you can stay current by logging on to thormx.com and the Thor Facebook page.