Stewart Back On Top With Phoenix Success 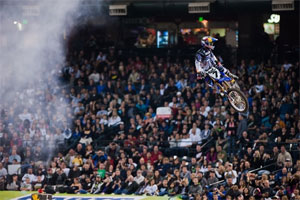 San Manuel Yamaha's James Stewart toasted his first supercross victory in more than twelve months as he rode superbly on his YZ450F to win the second round of seventeen in the AMA Supecross series (also an FIM World Championship) at Chase Field in Phoenix, Arizona.


The 25 year old erased the painful memories of the same event in 2010 where he fractured his scaphoid and ultimately was forced to the sidelines for the rest of the campaign. Stewart also had to overcome his nerves, a factor that led to a small crash during the heat race prior to the main event.


Seizing the holeshot later in the evening the 2009 champion was able to control the 20 lap sprint from the front and keep last week's winner Ryan Villopoto at bay for half of the distance until the latter slipped off. Stewart was then able to roll to the chequered flag for his fourth triumph at Phoenix.


"The track was tough and really slick tonight, it was so easy to over-ride it," said Stewart who is the only rider to win at Phoenix in both the SX and SX Lites classes. "I wanted a good start and with the holeshot I then did my own race. I was confident and Ryan [Villopoto] rode really well, we were both pushing the limits of traction out there and it was cat-and-mouse for a little while. It has been a long time since I won a race so this feels good. I just need to keep getting the starts and ride smart."


Yamaha was the machine of choice for the fastest riders at Chase Field as four YZ450Fs gained slots in the top ten. Justin Brayton finished 6th while Kyle Chisholm was 9th and Stewart's new team-mate, Kyle Regal, showed signs of improvement by grabbing 10th.


Stewart is two points behind Villopoto as the championship heads for the first time to the Dodger Stadium in Los Angeles for round three this coming Saturday.

Rider Standings After Race 2 of 17