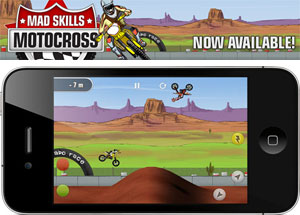 Mad Skills Motocross, an arcade-style racing game for iOS devices, rocketed to the top of the iTunes App Store charts on its first day, claiming the top spot in the competitive Games/Racing category in the USA and Sweden. It carries its momentum into its second day based on rave reviews, heavy support from professional athletes and media in the action-sports world, and a social-sharing element that encourages its players to spread the game across Twitter and Facebook. It's available on the App Store worldwide for iPhone, iPod Touch, and iPad.


Leading app-review website Touch Arcade called the physics engine behind Mad Skills Motocross "absolutely brilliant," resulting in a game that's "an absolute blast to play." Reviewer Jared Nelson went on to write, "If you're in the market for a fast-paced arcade-style racing game it doesn't get much better than Mad Skills Motocross."


First-time mobile-game developer Tobias Andersson, of Sweden's Turborilla, was in awe of his game's first-day performance.


"I love Mad Skills Motocross," said Andersson from his Umea office. "Passionately. When the players love it too, and show it by pushing it up to being the number-one racing game ... it's hard to explain how it makes me feel. Very good, that's for sure."


The game began its second day on the US charts atop the Games/Racing category, #20 in Games, and #26 overall.


Mad Skills Motocross is available on the App Store now for the introductory price of only $1.99. To purchase, go to: https://itunes.apple.com/app/id410229362