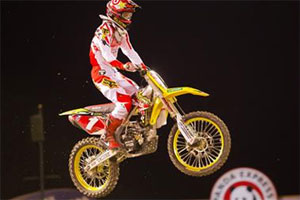 Reigning World and AMA Supercross Champion Ryan Dungey started his defence of the 2011 series with a podium at Saturday's night's opening round at Anaheim in California.


Said Dungey: "This is a great start to the season. We started out a little slow in practice, but the Rockstar Makita Suzuki team was able to make some good adjustments and by the Main we had a great setup for my Suzuki RM-Z450. I got a decent start and was about fourth, and I worked my way up to second. Ryan Villopoto was just a little too far ahead to catch, but I'm real happy with the second-place finish. It's a good start and we'll take from what we've learned and keep moving forward. I'm looking forward to Phoenix; it's been good for me the last couple of years and I'm looking for a good race there."


Metcalfe, the newest member of the Rockstar Makita Suzuki Team, had a great first-ever 450 heat race aboard his Suzuki RM-Z450 with a solid third-place finish. Metcalfe took the momentum of his heat race to the Main, where he propelled his RMZ to a third-place start, just ahead of Dungey. After being passed by Dungey, Metcalfe made a mistake, suffering an off-track excursion, and lost several positions. But he hung in there and was able to hold onto an eight-place finish in his career's first AMA 450 Supercross race.


"I started out a little tight and uncomfortable in practice," said Metcalfe. "My Rockstar Makita Suzuki team was able to make some adjustments and by the time we got to the heat race, I was feeling really good and I was happy with the set up on my Suzuki RM-Z450 - it was time to go racing. My heat race turned out really good: I got a good start and ran up to about second and ended up finishing third. I had another great start in the Main, was up front, comfortable and felt like I was in the groove, but then I made a big mistake and went off the track and that really upset my rhythm for a few laps. After that, I lost touch with the lead group and just wanted to finish out those 20 laps and not make any more mistakes. We had a pretty good first day and learned a lot and I'm looking forward to going to Phoenix."


The 2011 Rockstar Makita Suzuki team's next event is Saturday, January 15th, at Chase Field in Phoenix,