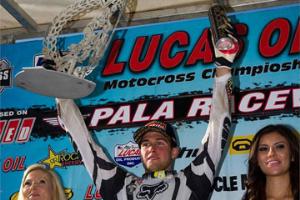 After a whirlwind season, 450cc rookie Ryan Dungey has been named the Rider of the Year by Cycle News.

Despite only being 20 years old, Dungey's resume reads like that of riders twice his age. In 2009, captured the championship in the lower classes of supercross and motocross, but expectations were somewhat low for his ability to compete in the 450cc class against more experienced competition.

Yet Dungey shot out of the gate with a second and two first-place finishes in his first three races of the season, amassing a lead that eventually grew into a 70-point margin over the competition. In fact, Dungey eventually set the record for the most points ever in a rookie season on the way to capturing the championship. The only other rookie to ever do so was Jeremy McGrath.

Dungey was also able to squeeze in a weekend to represent Team USA in Motocross des Nations, helping the national team to their sixth-consecutive victory.

After such a storied season, there was no other choice for the news source to give the prestigious award to. When asked to speak on his accomplishments, Dungey was humble, indicating that he was simply focusing on gearing up for the new season.

"It's a new year and new opportunities," he told the news source. "I'm really looking forward to getting out there with all the guys - there's going to be a really good field this year, and I really just have to put in my time and preparation and do all I can do on my part. All I can do is give it my best effort, and if I go out there and enjoy it and put my head down then that's all I can do."