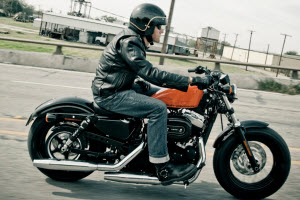 Comes from Harley-Davidson's Sportster motorcycle family that was first launched in 1957, the 2011 Harley-Davidson Forty-Eight never claims to be a touring cruiser. However, this low-riding Sportster Forty-Eight is a modest, urban motorbike that's suitable for joyriding within the city. With its solo seat, bobbed fenders and beefy tires on black-rimmed wire wheels, this bike no doubt oozes with an impeccable profile and raw, elemental appearance.

This menacing bike cruises down the road with a slam-black 1200 cc, air-cooled, 45-degree Evolution engine that propels 9-ft. lbs. of torque at 4,000 rpms. Its engine is also equipped with two pushrod-operated valves per cylinder, and a sequential port electronic fuel system that offers a responsive throttle and seamless starting every time.

Of course, this 2011 Harley-Davidson Forty-Eight has the original all-steel peanut fuel tank, which debuted on Harley-Davidson back in 1948. Its look is further improved with the drag-style handlebar, slammed speedometer, and lowered front and rear suspension. Finished with a low seat height (26-inch), and under bar mounted mirrors-what you have is a stern looking bike with an approachable riding position. Best of all, the 2011 Harley-Davidson Forty-Eight is extremely drivable, not bulky, and easily steers-all of these and more for a decent price of $10,499.

Read the comprehensive review at SmartCycleShopper.com.