Metcalfe Back With Thor 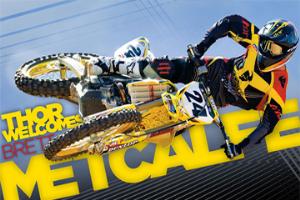 Thor/Parts Unlimited has announced that they will bring back Australian-born rider Brett Metcalfe, who is coming off an impressive 2010 season in the Lucas Oil AMA Motocross Championship.

Metcalfe finished second in the 2010 season behind Ryan Dungey, who is also part of Thor/Parts Unlimited. The signing means that Thor will field a team featuring the two best riders from 2010, making them a heavy favorite to take home to the championship.

"All of us at Thor are excited to have Metty back on the team," said Thor General Manager Dave Gowland. "He is a great guy both on and off the track, and as everyone saw this summer, is an extremely talented racer. We're all very excited for the upcoming 2011 season."

Metcalfe had previously raced for Thor from 2007-2008 on a Kawasaki. He then made the switch to Honda as a member of the GEICO Powersports team in 2009 and 2010.

Two racing teams operate under the Thor Banner: Rockstar Mikita Suzuki and Monster Energy Kawasaki. It is expected that Metcalfe and Dungey will be riding for the Suzuki team while Ryan Villopoto will continue to head up the Kawasaki branch.