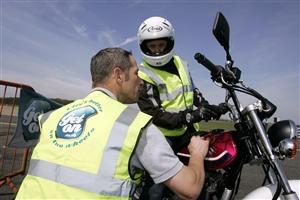 The federal government is urging all states to adopt mandatory motorcycle helmet laws after a troubling new report revealed an increase in fatalities related to head injuries.

In the mid 1990s, most states had a helmet law on the books, as the federal government threatened to withhold funding for highway projects if the states did not adopt them. That ordnance was later repealed, and many states erased their helmet laws as well.

The Associated Press reports that today, just 20 states have full helmet laws, while others require limited and circumstantial protection. In 2009, 4,400 bikers died on the road from motorcycle accidents, with head injuries being the leading cause of death. That figure is nearly double the rate in 1999, when the laws were in place.

A new report showed that the U.S. is actually falling behind in road safety compared to other developed nations. U.S. traffic dates were higher than countries like the UK, France, Germany, Canada, Australia and more.

"People have to get outraged about this safety issue that is causing so many deaths needlessly," NTSB vice chairman Christopher Hart told the news source.