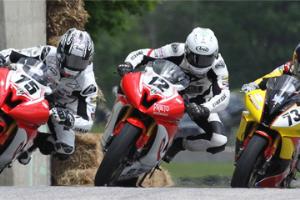 AMA Pro Racing's exciting SuperSport class will undergo some subtle changes in configuration for the 2011 season. The segregated Top Gun and Young Gun class within the class structure has been eliminated. The series will continue to feature two divisions, but the overall champion will be the highest points scoring divisional champion. A special award highlighting the younger SuperSport riders will also be awarded to the highest points scoring 16-21 year old rider.

The class will still feature two divisional championships that will be comprised of an equal number of points scoring races in each respective division. The minimum age requirement of 16 will be maintained, however, any SuperSport competitor is eligible to win their declared divisional championship. Riders will still be able to compete out of their declared division, but riders can only score points in their division. There will be a select number of combined division races, including the final race of the season. Each division will crown a champion rider and the divisional champion that scores the highest number of points will be the AMA Pro SuperSport National Champion for 2011.

In addition, the young rider in the 16 to 21 year old range that accumulates the highest number of points will be presented with a special Young Gun award at the season end banquet.

Riders may continue to race in the SuperSport class until such time they have won two championships. Any overall National Championship along with the qualifying Divisional Championship earned in the same season will be counted as one.

Riders who hold an Expert License from an acknowledged road racing sanctioning organization will be eligible for the SuperSport class, the full criteria is available in the AMA Pro Licensing documentation.

"We felt these changes were necessary to more clearly define the overall SuperSport Champion," said AMA Pro Chief Operating Officer David Atlas, "As with our other championships, the rider with the most points wins the coveted number one plate and we wanted to bring the same degree of clarity and recognition to the exciting SuperSport class, while also still acknowledging the accomplishments of the best young rider with a special year end award."

The 2011 AMA Pro SuperSport schedule and Divisional breakdown will be available in the near future. A special priced licensing fee will be available for applications received at AMA Pro offices on or before January 7, 2011. Please visit amaproracing.com or contact AMA Pro Racing Member Services at (386) 492-1014 ext.151.

AMA Pro Racing is the premier professional motorcycle racing organization in North America, operating a full schedule of events and championships for a variety of motorcycle disciplines. Learn more about AMA Pro Racing at amaproracing.com