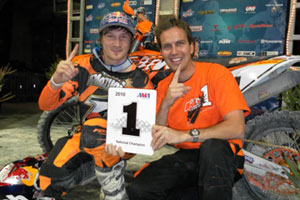 Red Bull/KTM rider Taddy Blazusiak finished his year on top. Not only did Blazusiak earn his 5th victory of the AMA EnduroCross Series but he wrapped up his second EnduroCross Championship.


Blazusiak started the night off well after impressing the crowd in the afternoon hot laps. Blazusiak turned the fastest lap time of the night nearly two seconds faster than the next closest competitor. Blazusiak's fast lap time earned him first gate pick in heat number one.


Off the gate, Blazusiak had a great jump that put him two bike lengths ahead of the field as they rounded the first turn. He went on to take an easy win to qualify into the main. It was determined that once Blazusiak qualified into the main event, all he had to do was show up for the main and the championship was his. Knowing that, the Red Bull/KTM team was able to run the number one plate on his bike for the main event.


Also having decent heat races were Christini/KTM rider Geoff Aaron who won heat number two. Heat number three showed a great battle between Justin SoulÃ¨ and FMF/KTM rider Mike Brown. The KTM rider had the early lead but was passed through the first boulder section by SoulÃ¨. For the remainder of the race the two switched the lead multiple times. When the checkered flag flew it was SoulÃ¨ with the win followed by Brown in a close second.


RPM/KTM rider Kevin Rookstool qualified for the main event after winning his semi race. His teammate, Maria Forsberg, missed qualifying for the night show by one space earlier in the day after an amazing last chance qualifier. Look for Forsberg to make history next season as the first Women's Pro rider to make the EnduroCross night show in the Pro class.


At 10:00pm the gate dropped for the final main event of the season. Fans saw two KTM's out front earlier. Aaron grabbed the holeshot followed closely by Blazusiak. It didn't take long for the Polish rider to push his way into the lead and never look back. Blazusiak went on to take a commanding win and the championship title. Aaron finished a strong 2nd place and took 2nd in the championship chase. Brown rode a strong race to push forward from a bad start to finish 4th overall.


In typical fashion, Blazusiak gave the fans a great show after his win. He took a few victory laps down the start straight popping wheelies and stoppies at one point getting off his bike to bend down and give it a kiss. "I am very excited about this championship. It means a lot to me to take home this title. I can't thank my Red Bull/KTM Team enough for all of their support."