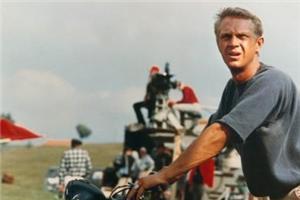 Triumph has unveiled several new models lately, including the Tiger adventure bikes, and now riders will have the chance to dress according to their new ride.

The British manufacturer has unveiled a new line of motorcycle apparel for the fall and winter riding seasons. The shirts and jackets have a vintage look and feel, with several designs inspired by British motorcycling legend Steve McQueen.

British ex-pats will likely appreciate the new Stockton jacket, which is made of black leather with red detailing. A Union Jack design is embossed over the coat's zip cover. Those looking for a traditional motorcycle jacket will likely instead opt for the Lexford, a conservatively-styled piece that the company claims "looks great on or off a bike."

Besides the line of jackets, Triumph also produces a number of casual options. McQueen fans will likely be enticed by the fourth edition to the company's "Legends" series, with a shirt that features the famous biker riding at the International Six Day Trials in 1964. Two other designs pay tribute to the Triumph legacy - "Castrol 68" pays homage to the Isle of Man TT races while "A Breed Apart" revives a t-shirt design sold by Triumph dealers in the early 1970s.