Suzuki Cuts Team To One Rider 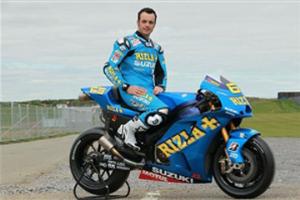 Suzuki has announced that it will only enter one rider in the 2011 MotoGP series, bucking most manufacturers' strategy of fielding a two-man team.

Racer Loris Capirossi left the team for Pramac Ducati at the end of the season, fueling speculation that Rizla Suzuki would be in the market for a new rider. But the Japanese manufacturer has officially announced that only Alvaro Bautista would compete in the premiere motorsports event next year.

Bautista will ride the company's GSV-R800. Suzuki has struggled heavily with the bike and has not won a race since 2002. The team's last podium finish was in 2008.

Several sources report that Dorna Sports, the company that runs MotoGP, includes stipulations in manufacturer's contracts that forces them to enter at least two bikes. However, Kawasaki was allowed to race with a one-rider team in 2009 before pulling out of the competition completely in 2010. Suzuki's contract runs until the end of the 2011 season, but the manufacturer's future with MotoGP is unclear.

Bautista ended his season in 13th place, capturing fifth-place honors in two races. Capirossi had a less successful and injury-plagued season, ending in 16th. Although the competition has lost a bike from Suzuki, Ducati has added another, meaning 17 riders will hit the track again in 2011.