BMW R 1200 GS Is Comfortable On Dirt Or Pavement 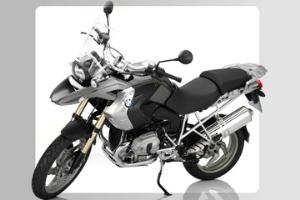 The R 1200 GS is BMW's high-end dual sport bike, suitable for riders who want power and performance no matter what terrain their riding on.

Torque is king on the R 1200, with BMW prioritizing it over pure output. The company claims 89 pound-feet of torque at 6,000 RPM, but says that the bike achieves consistently high levels up to 5,000. The power is nothing to sneeze at either, with the engine producing 110 horsepower at 7750 RPM.

All of this is powered by an 1170cc DOHC 2-cylinder boxer engine with 4 valves per cylinder. Yet the bike isn't focused on pure performance - BMW also touts intangibles like the special attention paid to making sure the exhaust system gives off a suitable and powerful roar.

BMW recently announced a new color scheme for the R 1200 GS that fans have been clamoring for for several years. Riders can now order the bike in the "Triple Black" special edition, which replaces the silver and white parts of the bike with an all-black finish.

Those who favor one terrain over the other may want to further customize the bike with motorcycle accessories and parts, like improved shocks for rough surfaces or a higher windscreen for long journeys.