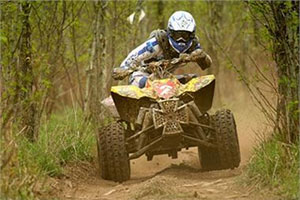 GNCC ATV Champion Chris Borich clinched his 11th victory in the 13-race schedule at the Ironman GNCC aboard his Championship-winning Suzuki QuadRacer R450 at the weekend.


Borich, who lifted the title at the 12th round of the series, finished the season off in style by dominating the race in Crawfordsville, Indiana. He led the race from the start and never relinquished the top spot; taking the holeshot and quickly pulling away from the rest of the pack for the entire two-hour race through the woods. When the chequered flag came out, he was more than a minute ahead of the rest of the field.


"I got a good start and I knew I had the Championship all wrapped up, so I decided to go out and put the hammer down to see what I could pull," said Borich. "It was just an awesome day out there and I was having a ball all by myself. My Suzuki has had great power all year long and I'm really happy with how this season has gone for me."


His winning season has cemented the status of the Suzuki QuadRacer R450 as the top Quad in USA competition: The QuadRacer R450 has won the GNCC ATV title two years in a row and it's also been the Championship-winning Quad for three years running in the AMA ATV Motocross series.