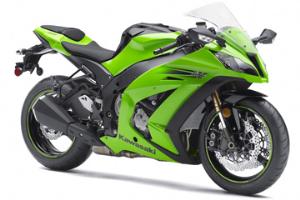 In recent years, Kawasaki has lagged a bit behind in the superbike market, as the company's fans have clamored for a machine that could compete with the BMW S1000RR, currently at the top of the charts in terms of pure power. Well racing fans, wait no longer, as the new Kawi is coming soon.

Kawasaki recently debuted the 2011 Ninja ZX-10R, and if the numbers are anything to go by, this new machine will put the company on top of the superbike rankings. Boasting 210 horsepower - ten higher than the BMW - and the best power-to-weight ratio on the market, the new Ninja looks to turn the company's fortunes around.

The bike has been totally rebuilt from the ground up, according to news outlets who got a glimpse of the new model at Intergot Cologne. Among the new features is a new advanced traction control system dubbed S-KTRC that gathers data about what type of surface one is riding on and adapts its performance to match the terrain. Despite the substantial power upgrade, Kawasaki has managed to shed 22 pounds off of the 2010 bike.

With Team Green struggling in MotoGP and other superbike races, the new design has to have Chris Vermeulen and his teammates excited about next season.

If the early reports are any indication, Kawasaki looks to have a winner on its hands.