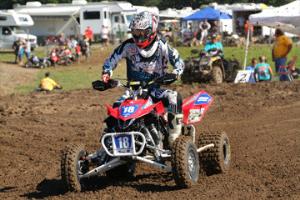 As the ATV racing season comes to a close, awards are being handed out to recognize some of the top riders in the AMA ATV Motocross series. While he didn't end up taking home a championship, young Cody Grant was recently named the Rookie of the Year at a banquet in Pala, California.

The 24-year-old Kentucky native moved up to the Pro tier this year and impressed many with his high finishes. Although he was racing against seasoned veterans like Pat Brown and Dustin Wimmer, he was able to place 11th in the point standings and earn a number of top-10 finishes for the Yoshimura team.

Yoshimura boss Kory Ellis said the team was proud of their young rider.

"Yoshimura is really happy to have supported Cody the last two years," he said. "We're proud to see him move up to the Pro class and win the rookie of the year award, and hope to have continued success with him."

Despite his success, this offseason will not be one of leisure for Grant, as he will return to Kentucky to help his family on their farm. The rider says he will continue to train and is looking to improve his racing for next season.