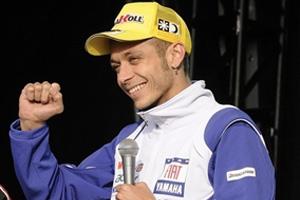 Valentino Rossi, considered by many to be among the greatest competitive riders of all time, will undergo shoulder surgery once the season ends, in order to repair an injury that has been bothering him since a fall in April.

Coming off back-to-back world championships, Rossi has been hampered by injuries this season, and is currently sitting in 4th place in the point standings. At a promotional event in Italy, Sky Italia TV overheard Rossi telling a colleague that "in the end the problem is the shoulder. At the end of the year I'll have it operated on."

With seven MotoGP championship wins, many considered Rossi to be the heavy favorite going into the 2010 season. But a broken leg in June forced the rider to miss four races, ending any hope of an eighth title and allowing his Yamaha teammate Jorge Lorenzo to establish a massive lead. Despite this setback, he has raced well since his return, although he has complained of lingering soreness in the shoulder and hasn't won since the opening race.

The surgery could come at a critical time for Rossi. The winter is generally considered to be an important training time, and Rossi could miss out on some practice. In addition, Rossi will change teams at the end of this year, leaving Yamaha for Ducati.